Newham Specialist Children & Young People's Services, (SCYPS) Community Children’s Matron Rebecca Daniels is celebrated by her colleagues for her outstanding contribution to nursing - in quite an unusual setting.
Image 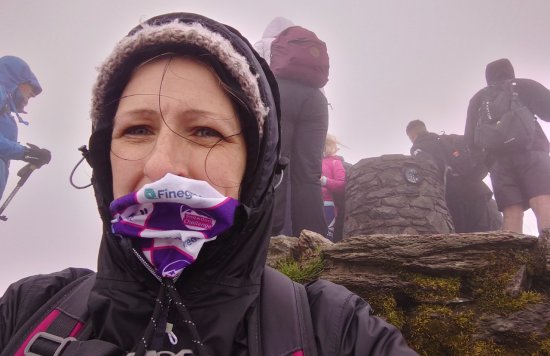 Newham SCYPS Community Children’s Matron Rebecca Daniels has been presented with a Cavell Star Award for her outstanding contribution to care.

Rebecca was taken completely by surprise - her colleagues presented it at an impromptu ceremony on top of Snowdon (Yr Wyddfa).

Braving winds of up to 50mph as well as driving rain and hail, Rebecca and her nursing colleagues were at this year's Snowdon Challenge - part of the Cavell trust/@Wenurses annual #10kyourway fundraising drive which occurs every October to raise essential funds for nurses in personal and financial hardship.

Part of the reason for Rebecca receiving the prestigious award is for her role in the formation of the Children’s Community Nurse (CCN) national forum during the pandemic.

The forum's collective efforts helped to change legislation to enable children needing aerosol-generated procedures could get back to school with their peers.

Rebecca was later appointed to the Queen’s Nursing Institute (QNI) to lead the development of new Transition to Community Children’s Nursing (CCN) resources, to enhance the quality of life for children and families nationally earlier this year.

In recent years the Snowdon Challenge has become big enough to have its own event in June (when the weather is apparently much better!)

This year saw around 100 people taking part each with an individual fundraising total of £250 - to date, participants have raised just over £24k collectively.

For Newham SCYPS Rebecca, this was the fourth consecutive month of physical challenges - fundraising for both Cavell (£240 raised) and also Dementia UK (Over £1k).

Rebecca took the opportunity to go along with a fellow CCN (Becky Hepworth) from Isle of Wight who is a core member of the #UKCCN Network, which evolved during the pandemic.

The two worked closely online for the past two years but had not actually met in person until the trip.

On both the fundraising climb and being presented with a Cavell Star award, Rebecca said:

"It was an absolutely fabulous challenge and we will be recruiting more people to join us next year to make the event bigger and raise even more essential money for nurses, HCA and midwives in need of financial and personal support.

"I'm delighted to have been awared a Cavell Star - and made getting to the peak of Snowdon twice as memorable!

"I'm happy to receive it on behalf of all my fantastic colleagues in the Newham SCYPS Community Children's Nursing Service ​and my amazing Children's Community Nurses across the UK as part of our national #UKCCN network, whose dedication and commitment to care is second to none."